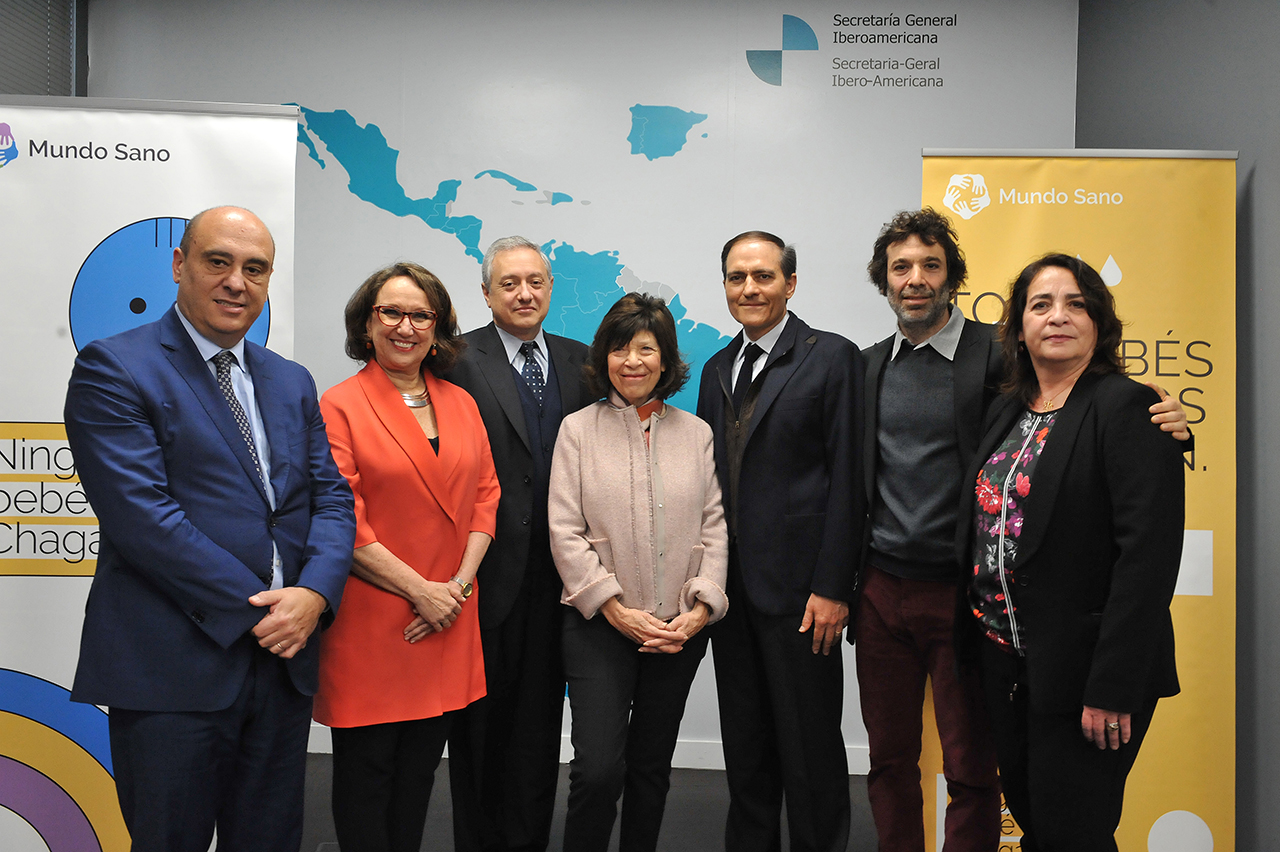 The Mundo Sano has launched the “Not a Single Baby with Chagas” campaign at the Ibero-American General Secretariat (SEGIB) headquarters. The initiative seeks to raise awareness of this unjust disease and ensure that all babies who are infected with Chagas during pregnancy and all women of reproductive age are able to access diagnosis and treatment.

The event was attended by Silvia Gold, President of the Mundo Sano Foundation; Rebeca Grynspan, the Ibero-American Secretary General; Pedro Albajar, Director of the WHO’s Chagas programme; Javier Martos, Executive Director of UNICEF’s Spanish Committee; Marcelo Abril, Executive Director of the Mundo Sano Foundation and Mariano Sigman, neuroscientist and a member of Mundo Sano’s Board of Directors. The attendees discussed the origins and evolution of Chagas disease, and emphasised the crucial priority of putting an end to mother-to-child transmission.

Following the progress made in reducing transmission by vectors and blood transfusions, one of the main forms of transmission at present is vertical transmission, which is when the disease is transmitted by an infected mother to her child during pregnancy.

Every year, 9,000 babies are born with Chagas disease; that is equivalent to one every hour. The majority are not diagnosed or treated. This campaign seeks to ensure that by 2030, not a single baby is born with Chagas, which means that 100% of mothers carrying the disease will be diagnosed and treated.

To achieve this, Mundo Sano has created a Commitment to which it has invited a range of different organisations and individuals to adhere, with a view to truly transforming the Chagas landscape.

Silvia Gold, President of the Mundo Sano Foundation, said: “Within the framework of the Sustainable Development Goals, we are determined to help wipe out Chagas disease. Today, we find ourselves in an exciting new era, as there are already official treatment guidelines and the medication is available. To present this initiative at the SEGIB, a key Ibero-American organisation in Spain, alongside the WHO and UNICEF’s Spanish Committee, is without a doubt the best possible platform.”

Chagas disease originated in Latin America, and currently affects 8 million people worldwide. It is estimated that, due to recent migratory flows, there are between 50,000 and 100,000 people with Chagas in Spain, and no fewer than300,000 in the US.

Pedro Albajar, Head of the WHO’s Chagas Programme, said:“Mundo Sano’s “Not a Single Baby with Chagas” campaign responds to one of the goals outlined in the WHO’s 2020-2030 strategy. It focuses efforts on girls and women of reproductive age, pregnant women who are already infected with the parasite, their newborns and any other children they may have, with a view to monitoring and preventing the transmission of Chagas disease from mother to child. It is important to bear in mind that at the WHO, we now believe that congenital Chagas disease can not only be controlled, it can be eliminated completely.”

Through this campaign, the Mundo Sano Foundation is seeking to raise awareness of the disease to help raise diagnosis and treatment rates.

Javier Martos, Executive Director of UNICEF’s Spanish Committee, added: “Only by working as part of a network can we achieve major milestones in the battle against diseases. Working with partners - including the private sector and civil society - allows us to generate results which are sustainable over time.”

To help guarantee that all babies born to mothers who are infected with Chagas and all women of reproductive age have access to diagnosis and treatment, the Mundo Sano Foundation has created the website www.ningunbebeconchagas.com, where anyone can sign the commitment and help make sure that by 2030, there is “Not a Single Baby with Chagas”.

How can I get involved?

All the information on the campaign is available at:

Chagas is a parasitic disease caused by the parasite Trypanosoma cruzi. It is transmitted to humans mainly from the faeces of triatomine bugs, which comes into contact with the skin when people are bitten by these blood-sucking bugs. It can also be transmitted by an infected mother to her child during pregnancy and childbirth(vertical or congenital transmission), through blood transfusions or organ transplants stemming from a carrier of the disease, or by ingesting contaminated food or drinks. Worldwide, Chagas affects 7.6 million people, including 1.2 million women of reproductive age. Every year, 9,000 babies are born with the disease. It is estimated that there are between 50,000 and 100,000 Chagas sufferers in Spain and 300,000 in the US.